The Golden State Theatre is no longer requiring proof of vaccination or negative test results for entrance into events.

Switchfoot – This Is Our Christmas Tour Get into the venue early, enjoy a private performance & soundcheck experience with SWITCHFOOT and take home some collectible goods! 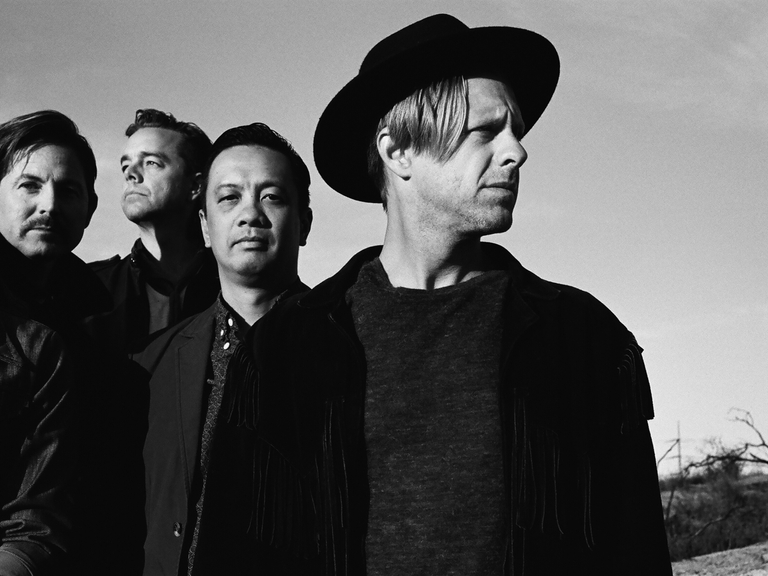 Jon Foreman – vocals, guitar Tim Foreman – bass Jerome Fontamillas – keyboards, guitar Drew Shirley – guitar Chad Butler – drums “We try to approach every record like its our first and our last, but this one feels extra special,” Tim Foreman says of Where the Light Shines Through, SWITCHFOOT’s tenth album and Vanguard Records debut. “The process of making it was a huge struggle, but it was cathartic, and I think that comes through in the music.” Indeed, the thematically ambitious, sonically adventurous dozen-song set—which marks the band’s return to the indie world after a lengthy major-label run—makes it clear that, two decades into their remarkable career, the beloved San Diego-bred quintet remains as compelling and uplifting as ever, delivering inspired, infectious songs that resonate with passion, insight and melodic craft. Such vivid new tunes as “Holy Water,” “Float,” “If the House Burns Down Tonight” and the poignant title track address and illuminate timeless spiritual struggles and philosophical dilemmas, while boasting some of the band’s catchiest hooks and most imaginative arrangements to date. The resulting album is a significant addition to the rich body of work that’s already established SWITCHFOOT as a consistently vital musical force. ‘We’ve learned that the best stories to tell are the ones that are hardest to live, and that was definitely true with this album,” adds Jon Foreman, Tim’s brother, bandmate and songwriting partner. “The stories in this album come from experiences that weren’t really fun at the time, but I don’t think we could have gotten here any other way.” Produced by SWITCHFOOT in collaboration with John Fields (who helmed the multi-platinum Beautiful Letdown), Where the Light Shines Through reflects the emotional gravity of its turbulent, yet ultimately rewarding, birth cycle. “We went through a lot, individually and as a band, in making this record,” Tim states. “Not to be melodramatic, but it was a dark season for us, and this record became a source of light in the middle of a dark season. It rose organically out of the ashes of adversity and surprised us all. That’s how we landed on this idea that the wound is where the light shines through; this album is about being surprised by hope.” “A thing that we talked about a lot with this record was moving forward while looking back,” Jon explains. “How do you arrive at a new place while also taking stock of where you’ve been? That can be very tricky to do, to look back and still feel like you’re arriving somewhere new.” “We really pushed ourselves, almost to the breaking point, for about a year and a half, which is the longest we’ve ever spent on a record,” Tim asserts. “We wrote and wrote and wrote, not thinking about what was going to be commercially viable or what we thought other people would like. We just kept writing and getting lost in the music, and using the music to help us navigate our way out of this dark place we were in. Then we came up for air at the end, and we found the themes that connect all these songs.” “The songs on the album were culled from a list of 80 or 90 songs,” Jon notes. “These are kind of the chosen ones, as it were. My favorite songs are the ones that feel like they’ve been given to you, where you don’t necessarily see your own fingerprints on the canvas. I equate songwriting with archaeology; some days you dig up a bottlecap, and other days you dig up a lost city.” SWITCHFOOT has been unearthing all manner of musical gems since their 1997 debut The Legend of Chin, steadily expanding their global fan base and critical reputation through such releases as New Way to Be Human (1999), Learning to Breathe (2000), the multi-platinum breakthrough The Beautiful Letdown (2003), Nothing Is Sound (2005), Oh! Gravity (2006), the Grammy award-winning Hello Hurricane (2009), Vice Verses (2011) and Fading West (2014). The latter album doubled as the soundtrack to the band’s documentary of the same name. Along the way, SWITCHFOOT established itself as a world-class live act with a series of sold-out world tours, while racking up a string of radio hits, including “Meant to Live,” “Dare You to Move,” “Stars” and “Mess of Me”. Beyond their career achievements, SWITCHFOOT has been active in a variety of philanthropic efforts, raising over a million dollars to aid kids in their community through the band’s own Bro-Am Foundation, a long-running annual benefit surf contest and concert that’s held every summer in Encinitas, CA. They’ve also maintained a deep commitment to a variety of humanitarian causes, lending their support to such worthy organizations as DATA, the ONE Campaign, Habitat for Humanity, Invisible Children and To Write Love on Her Arms. In recent years, various SWITCHFOOT members have taken the opportunity to explore creative pursuits outside of the band. For example, Jon Foreman recently released a series of solo EPs under his own name, and recorded with Sean Watkins of Nickel Creek as Fiction Family. “Where the Light Shines Through comes on the heels of various side projects and other little things that were taking away from the band’s time, for better and for worse,” says Jon Foreman. “We were trying to do a lot of different things, but to me this is a celebration of what we love and what we do best, which is play rock ‘n’ roll with this band.”